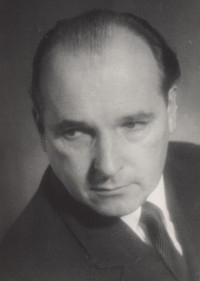 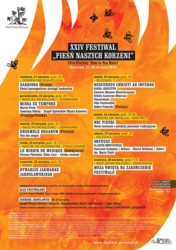 24th edition of the "Song of Our Roots" International Early Music Festival will be held in Jarosław in August 21-28, 2016. The programme offers 7 concerts, seminars, workshops and other fringe events.

This year, a "myth" has been chosen as the Festival’s main theme. However, it does not refer to literary texts associated with ancient Greece or other historic cultures, but rather to the term defined from an anthropological point of view, a concept of an archetypical figure, an instrument of cognition, which transfers contents related to identity, forms a vehicle of collective memory, and conveys a conceptualization of fundamental aspects of human existence and its sense.

The programme of this year’s edition includes also a series of presentations and seminars that will underline celebrations of 60th birthday of Marcel Pérès – musicologist, composer, singer, expert in the field of liturgical chant tradition and an honorary citizen of Jarosław.

- L’Orfeo by Claudio Monteverdi - masterpiece of European music, regarded as the first opera in the history;

- Sulla Lira - Le Miroir de Musique - a myth of Orfeo and his Lyre presented in different musical forms that have emerged throughout centuries, from ancient Greek hymns to late Renaissance works of Italian composers. 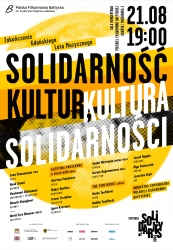 2016 edition of the "Mozartiana" International Mozart Festival will be held from August 21-27 in the Uphagen House, Oliwa Archcathedral and Oliwa Park in Gdańsk.

The audience will be presented with the musical interpretations of several artists, such as soprano Carolyn Sampson, Polish Chamber Choir and Venice Baroque Orchestra under the baron of Jan Łukaszwski (the Festival’s director), Beethoven Academy Orchestra under the baton of Gabriel Chmura, Polish Baltic Philharmonic Orchestra conducted by Massimiliano Caldi, Arystarchov Piano Trio and others.

The beginnings of the festival date back to 2006. The organizers’ primary aim was presenting to the Polish audience the music trends that were - in their opinion - most interesting and valuable in the world of jazz, nu-jazz, electronics and dance music. It was also important to showcase genres and artists that were not known in Poland at that time. Nowa Muzyka has also been the first outdoor festival to be held in post-industrial venue of a former coal mine with its entire infrastructure almost intact and available for all visitors.

2016 edition of Forum Musicum, organized by the National Forum of Music in Wrocław, will be held in August 18-27.

The events of the 10-day festival devoted to early music will be held in historical places of Wrocław - St. John the Baptist Cathedral, Town Hall, Piast Mausoleum, Oratorium Marianum and Old Town Square.

The repertoire presented during the concerts includes works from 15th-century Krakow manuscripts, compositions written by kapellmeisters of the Wrocław cathedral, Reneissance pieces and Italian music composed at the turn of the 17th and 18th centuries.

From August 15-31, Capella Cracoviensis Foundation holds the 2016 edition of the "Music in Old Krakow" Festival.

"Music in Old Krakow" is an event that continues the city’s the historical musical traditions which partially have been created by famous composers who performed or worked there, such as J.S. Bach, F. Liszt, J. Brahms, I.J. Paderewski and A. Rubenstein. The concerts take place in historical buildings around the city.

For 40 years the festival has entertained its guests with performances of a wide range of styles and genres. It will not be different this time, since the listeners will be presented with interpretations of compositions by J. S. Bach, F. Schubert, G. Ph. Telemann, G. F. Händel, B. Britten, S. Gubaidulina, F. Chopin, M. Karłowicz, A. Vivaldi, W. A. Mozart, B. Bartók, L. van Beethoven, W. Lutosławski, M. Ravel, C. Saint-Saëns, E. Grieg, J. Haydn, D. Schostakovich, C. Monteverdi, and many others. The programme includes also concerts of early Polish music, Medieval music and Orthodox Christian music.

Festival of Chamber and Organ Music in Wygiełzów-Lipowiec 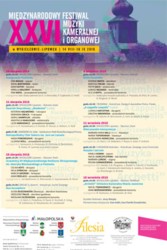 26th Summer Festival of Chamber and Organ Music will take place between August 14 and September 18, 2016 in Wygiełzów-Lipowiec (Vistula Ethnographic Park), Trzebinia, Chrzanów-Kościelec, Grojec and – for the 1st time – in Jaworzno.

The event offer covers 9 concerts held on Sundays, during which several Polish and foreign perfomers will present their skills to the listeners of the Lesser Poland province. The list of guest artists includes vocalists Ewa Biegas, Rafał Barmiński, and Adam Kutny, Akademia String Quartet from Lviv, Leopolis Choir under the direction of Ludmiła Kapustina (Ukraine), accordion duo Accrosphere, Etnos Ensemble, Barbara Maria Willia (Czech Republic), violinists Celian Kotz and Maja Syrnicka, Chamber Orchestra of the City of Jaworzno "Archetti" under the baton of Maciej Tomasiewicz, and many others.

Beethoven Academy Orchestra will premiere a new composition by Wojciech Czepiel on August 20, 2016 in Christ the Good Shepherd Church in Krościenko nad Dunajcem.

The concert series Jeszcze polska muzyka… (Polish Music Still Alive…), designed to promote forgotten Polish music, is held under the patronage of the Lesser Poland Province and the Ministry of Culture and National Heritage.

Academy of Early Music Foundation is the organizer of the 7th Wandering Summer Festival "At the Gothic Route – Music at the West Pomeranian Monuments", held between August 13 and September 17, 2016.

The event renders into practice the idea of interdisciplinary presentation and popularisation of places associated with the European Route of Brick Gothic in the West Pomeranian Voivodeship in a broad cultural context. The schedule combines a series of concerts (relating in their programme to the history and identity of the selected sites) and exhibitions with a presentation of touristic routes. The audience members are given an opportunity to participate in several meetings and guided tours, as well as become familiar with local attractions. The festival is addressed both to organized groups of tourists and local communities of Szczecin, Stargard, Chojna, Trzebiatów, Goleniów, etc.