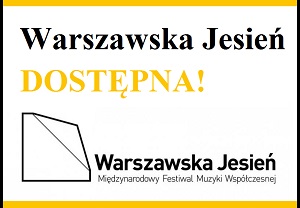 Works by Polish composers which refer to the complicated political situation of Poland in the 20th century will be performed on 13 December 2019 in the Mieczysław Karłowicz Philharmonic in Szczecin.

The programme will feature a dramatic fragment Pietà. On Smouldering Ruins Of Warsaw and Concerto for violin and orchestra, Op. 70 by Ludomir Różycki, one of the composers of the Young Poland period, as well as Symphony No. 1 by Henryk Wars.  The Szczecin Philharmonic Symphony Orchestra will be led by Noebert Twórczyński. The solois of the evening will be Janusz Wawrowski, an outstanding musician on a prestigious long-term artistic contract with the Warner Music label. One of his main goals as the originator and artistic director of international festivals is the dissemination of Polish music. The artist will play on the only Polish violin from the Stradivardi's workshop. 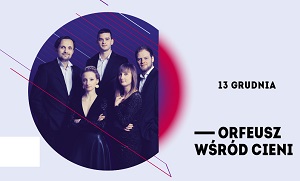 Sinfonia Varsovia String Quintet makes its phonographic debut in contemporary music repertoire. The album will be released on 6 December 2019! The ensemble will perform most of the recorded works on 13 December at 7 p.m. at the New Theatre during the concert entitled "Orpheus among shadows".

Exploration of sound spaces and memory – coded in individual and collective musical consciousness – are two main themes interlocking in the concert repertoire. The spectral and partly heterophonic Umbrae by Andrzej Kwieciński, written by the composer at the age of 20, create a fascinating sphere of microtonally glistening shadows, seducing simultaneously with ecstatic rhythmic obsessiveness. Quintetto per archi by Krzysztof Penderecki, a transcript of his String Quartet No. 3, is the composer's aural diary, recollections of Hutsul melodies of his childhood, played on a violin by his father who came from Rohatyn. Motifs taken from musical traditions are also the basis of the Five Folk Melodies by Witold Lutosławski and Votive by Roxanna Panufnik, with a Sephardic melody of prayer Kol nidre, written to commemorate Pamela Majaro – British pianist, sculptor and photographer. The repertoire will also include String Quintet No. 2 by Jan Duszyński.

After the concert, there will be a meeting with the artists combined with the promotion of the Sinfonia Varsovia String Quintet (Adam Siebers – violin, Kamil Staniczek – violin, Katarzyna Budnik – viola, Marcel Markowski – cello, Michał Sobuś – double bass) phonographic debut.

Warsaw | Improvisation – a way of teaching and understanding 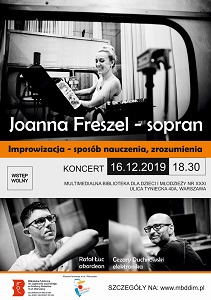 The world premiere of a new piece by Wojciech Błażejczyk will take place during a concert 'Improvisation – a way of teaching and understanding', which will take place on 16 December 2019 at 6.30 in the Warsaw Multimedia Library for Children and Youth (40a Tyniecka St.).

Joanna Freszel together with composer Cezary Duchnowski and accordionist Rafał Łuc will sing and improvise – translate new music with words, images, and sounds to bring inspiration and better understanding of contemporary classical music to the listeners. The programme will feature one world premiere of Wojciech Błażejczyk's compositions (for voice, accordion and electronics), three languages, four composers, breath, and interpretation.

The concert is the last event organised by Joanna Freszel in the frame of the Scholarship of the Capital City of Warsaw. The vocalist graduated from the Fryderyk Chopin University of Music in Warsaw in the class of Jadwiga Rappé. She is a laureate of numerous vocal competitions, winner of special awards in international competitions. In 2016 her album Real Life Song was nominated for the 'Fryderyk' awards of the Polish phonographic industry in the categories 'Album of the Year Contemporary Music' and 'The Most Outstanding Recording of Polish Music'. In 2017, she became a laureate of Polityka's Passport in the "Classical Music" category.

The project 'Improvisation – a way of teaching and understanding' is financed by the Capital City of Warsaw. Admission to the concert is free! 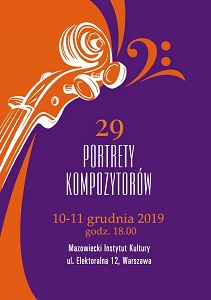 The best ensembles specializing in contemporary music performance –Hashtag Ensemble and Spółdzielnia Muzyczna contemporary ensemble – will take part in the 29th edition of the "Portraits of composers" festival, which will take place on 10-11 December 2019 at 6 p.m. at the Masovian Institute of Culture (12 Elektoralna St., Warsaw).

The "Portraits of composers" festival have been organized by the Polish Composers' Union since 1988. Every year it presents chamber works by several contemporary composers. The programme is designed so that listeners can get acquainted with compositions characteristic for a given artist. During the upcoming concerts we will listen to the works by Marcel Chyrzyński and Eunha Chang.

Marcel Chyrzyński performs the function of the President of the Polish Composers' Union in Kraków. He is the director of the Institute of Composition, Conducting and Theory of Music at the Academy of Music in Kraków and the director of the International Festival of Kraków Composers. In 1994-98 he wrote a series of compositions Quasi Kwazi I, II and III for solo clarinet, which had its performances in Poland, Germany, Austria, Spain, Portugal, France, Italy, South Korea, Australia and the USA. and was broadcast in the Andrew Ford's The ABC Music Show programme by Australian Radio. The premiere of the composition Death in Venice, inspired by the Luchino Visconti's film of the same title, took place during the monographic concert of Chyrzyński in Los Angeles (2017). The next series of works by Chyrzyński entitled Reflection is an expression of thoughts related to the transience and fragility of existence. Reflection No. 1 was commissioned by the Amar Corde quartet and entered the ensemble's repertoire permanently. Reflection No. 4 was premiered during the 27th Takefu International Music Festival in Japan – the composition was commissioned by the organizers of the project. Reflection No. 7 was commissioned by Chang-min Park – the artistic director of Ensemble SoriYuhi and premiered at Daegu Concert House. The Polish premiere will take place at the concert on 10 December.

On 11 December we will listen to the music by a composer from South Korea, Eunho Chang. He is a graduate of Keimyung University and the Fryderyk Chopin University of Music, where he also obtained a doctorate in musical arts under the supervision of Prof. Marcin Błażewicz. In the Sanjo cycle for solo instruments or voice, the composer presents his own view of traditional Korean music using contemporary compositional means and Western instruments, which are to imitate Korean instruments through the use of appropriate performance techniques. Eunho Chang himself will play on one of these instruments, called saenghwang. We will also listen to the Lyric Nocturne for a traditional Chinese bamboo flute called dizi. The final of the concert will be the premiere of Eunho Chang's Prism, which is based on the reflection of different colors of sounds coming from the "prism".

Częstochowa | Play while you play. Instrumental Theater of Bogusław Schaeffer 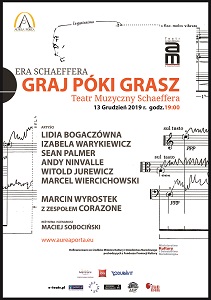 Play while you play. Instrumental Theater of Bogusław Schaeffer – an additional event of the 11th "Schaeffer's Era" Festival – will take place on 13 December 2019 at 7 p.m. at the Adam Mickiewicz Theatre in Częstochowa.

The "Schaeffer's Era" Festival is a cyclical event that combines music, theater and dance and promotes the rich creative output of the Polish contemporary composer, music theoretician, playwright, philosopher and graphic artist Bogusław Schaeffer. The Festival takes place in the autumn season in Warsaw, regularly since 2009. Different events are also presented in various cities in Poland and around the world. This year, the "Schaeffer's Era" additional event will take place in Częstochowa,

Play while you play is Schaeffer's instrumental theater in a new setting – a large, international and interdisciplinary stage performance inspired by the work of one of the most versatile and respected Polish contemporary artists. Performance directed by Maciej Sobociński, who collaborated with the Adam Mickiewicz Theatre in Częstochowa, is a collage of actor's creations, contemporary dance and various musical forms. Accordion virtuoso Marcin Wyrostek with the Corazon ensemble and the charismatic rapper Andy Ninvalle will take part in the spectacle, along with the actors: Lidia Bogaczówna, Izabela Warykiewicz, Marcel Wiercichowski, Sean Palmer and Witold Jurewicz. The unusual event shows the work of the artist who has become a source of inspiration for future generations.

Mieczysław Weinberg, whose 100th birth anniversary we celebrate this year, is one of the "great absentees" of Polish music of the last century – it has only been a dozen years since his compositions appear more and more frequently in concert programmes around the world. His works will be performed by the outstanding violinist Gidon Kremer at the National Philharmonic on 10 December 2019 at 7 p.m.

Weinberg's I Sonata for solo violin, Op. 82 was written in 1964 for the violinist Mikhail Fichtenholz. The five-part composition combines elements of Baroque, Classical and Romantic traditions. VI Sonata for violin and piano, Op. 136 bis was written in 1982, but the composer did not include it in the official catalog of his works and until 2007 it remained unknown. Dedicated to the "Memory of my mother", it was created shortly after Weinberg found out –  almost 40 years after the fact! –  about the tragic fate of his family who died during World War II in the Nazi labor camp in Trawniki in the Lublin region. This is undoubtedly one of the composer's most personal works.

The trio of outstanding musicians – Gidon Kremer, Georgijs Osokins and Giedrė Dirvanauskaitė – will also perform Ferruccio Busoni's Chaconne based on Chaconne from the Violin Partita No. 2 in D Minor, BWV 1004 by J.S. Bach and Ludwig van Beethoven's Triple Concerto in C Major, Op. 56, arranged for piano trio by Carl Reinecke. 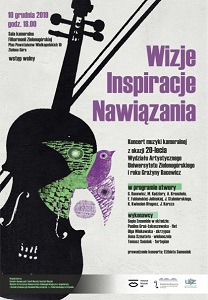 The "Visions – Inspirations – References" concert on the 20th anniversary of the Faculty of Arts at the University of Zielona Góra and the Year Grażyna Bacewicz will take place on 10 December 2019 at 6 p.m. in the chamber hall of the Zielona Góra Philharmonic (10 Powstańców Wielkopolskich Square).

The planned concert is the fruit of cooperation of the Institute of Music of the University of Zielona Góra with the Composition Department of the I.J. Paderewski Academy of Music in Poznań. The concert is devoted to the work of contemporary composers representing Zielona Góra and Poznań.

The concert programme includes chamber works by Grażyna Bacewicz as well as compositions by contemporary composers written over the past several years, including three premieres: Ewa Fabiańska-Jelińska's BallaDo-BallaRe for flute and piano (2019), Katarzyna Kwiecień-Długosz's In a snare (BACG) for four performers (2019) and Juliusz Karcz's Quartetto danzante for flute, violin, cello and piano (2019). This repertoire will be presented by Sepia Ensemble twice: on 10 December 2019 in Zielona Góra and on 15 January 2020 in Poznań.

The upcoming concert will be hosted by Elżbieta Samosiuk. Admission is free! 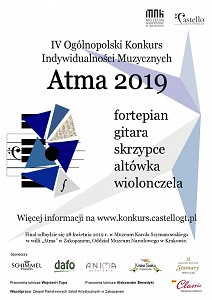 The laureates of the 4th ATMA Polish National Competition for Musical Personalities will perform on 9 December 2019 at 7.30 p.m. in the Polish National Radio Symphony Orchestra Concert Hall in Katowice.

By the jury's decision, Paweł Wojciechowski, a 16-year-old pianist from Warsaw, became the winner of this year's, 4th edition of the ATMA Polish National Competition for Musical Personalities. He is a student of Joanna Ławrynowicz at the Zenon Brzewski Secondary Music School in Warsaw. The laureate of the Competition can not only enjoy financial prizes (PLN 5,000 and the Schimmel Pianos award – PLN 5,000), but above all he is honored with the opportunity to appear as a soloist with the Polish National Radio Symphony Orchestra at its headquarters in Katowice. The other finalists also received the NOSPR Award of Ewa Bogusz-Moore – they will all perform at the headquarters of the Polish National Radio Symphony Orchestra in Katowice during chamber concerts.

The upcoming concert will feature Szymon Drabiński, Wilhelm Pilch and Milena Pioruńska, who will present a programme composed of works by Fryderyk Chopin, Karol Szymanowski and Roman Ryterband.