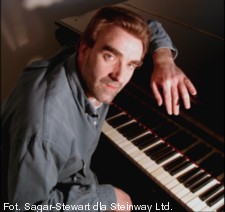 British pianist Jonathan Plowright and Szczecin Philharmonic Symphony Orchestra conducted by Łukasz Borowicz will perform Piano Concerto in A minor by Ignacy Jan Paderewski on April 29, 2016 at the Mieczysław Karłowicz Philharmonic in Szczecin.

Hailed by reviewers as "a colossal musical mind" with a "transcendent technique", Jonathan Plowright is "one of the finest living pianists" according to Gramophone Magazine. Gold Medallist at the Royal Academy of Music and a Fulbright Scholar, prizewinner of many competitions, the artist also won the Gold Medal at the Royal Overseas League Competition as well as first prize at the European Piano Competition. Critics, colleagues and audiences alike have since appreciated his national and international performances and he has been in demand all over the world as recitalist and solost who has appeared with leading orchestras and ensembles and given numerous radio broadcasts. He has several successful recordings on the Hyperion and BIS labels, which have been enthusiastically received with outstanding reviews in the worldwide media.