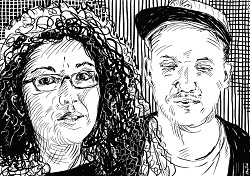 "Super Sam + 1" is a series of events (solo performances and duos), which are held between September and the end of 2016. The project focuses mainly on music, however, it also includes other forms of artistic expression such as performance, multimedia or monodrama. Each event involves the participation of one Warsaw-based artist. All invited performers present their premiere works, as well as meet local artists and audience during the workshops.

Pianist and composer Sylvie Courvoisier was born in Lausanne and has lived in New York since 1998. She has led several groups over the years and has recorded over 40 records for different labels, notably ECM, Tzadik and Intakt records. She has been commissioned to write music for concerts, radio, dance and theatre. She performs regularly solo and in a duo with violinist Mark Feldman, or as a a member of Mephista (an improvising trio with Ikue Mori and Susie Ibarra) and trio with Ellery Eskelin and Vincent Courtois.

Jan Emil Młynarski, born in Warsaw in 1979, is a drummer, producer and singer. He graduated from the prestigious Drummers Collective in New York. Since 1998 he has been playing in Wojtek Pilichowski’s band and led his career as a session musician performing with the leading figures of Polish popular music industry (Kayah, Reni Jusis, Sistars, Smolik, Edyta Górniak, Maryla Rodowicz, Adam Sztaba, Paulina Przybysz, Novika, etc.). Toghether with Gaba Kulka he created the "Młynarski Plays Młynarski" project, in which he interprets his father’s (Wojciech Młynarski) songs. He performs also in the "Voices of the Mountains" project with Janusz Olejniczak, Sebastian Karpiel-Bułecka and Atom String Quartet under the baton of Jerzy Maksymiuk.