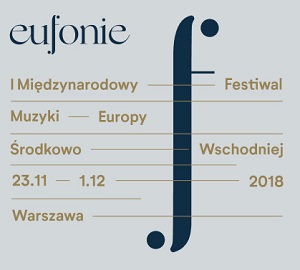 11 concerts during 9 days in 5 concert halls. World-famous soloists and European orchestras. The Polish Composers' Union invites to the 1st International Festival of Central-Eastern Music 'Euphonie', which will take place from November 23 to December 1, 2018 in Warsaw.

"Eufonie" is a new music festival, referring to the tradition of the regional community of most countries today referred to as Central and Eastern Europe, stretching from the Balkans, through Romania and Austria, the Visegrad Group countries, the Ukraine and Belarus, to the Baltic countries, sometimes extended to Scandinavia. This area is a fascinating melting pot of influences from the East and the West, boiling with cultural energy which often determined the identity of nations deprived of their own countries.