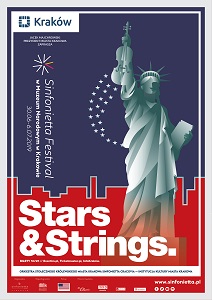 "Stars and Strings" is the title of the fifth Sinfonietta Festival at the National Museum in Kraków which announces the unique, twenty-fifth season of Sinfonietta Cracovia. The Krakow Orchestra will celebrate with American grandeur on 30 June – 6 July 2019.

The festival will start with minimal music. The director of Sinfonietta – Jurek Dybał will present works of John Cage, Steve Reich, Philip Glass and John Adams. The famous In C by Terry Riley's will be performed under his baton by... the audience!

The "For Our Freedom and Yours" concert will be held in the beautiful interiors of the Krakow Cloth Hall – maintained in the spirit of the broadly understood American idea of ​​freedom and friendship between the nations. The world-famous tenor Stanley Jackson will sing for the first time in Polish! In addition to the songs by Ignacy Jan Paderewski to the words of Adam Mickiewicz, the American singer will perform spirituals songs. This concert will also premiere Jubilee Sinfonietta written by the winner of the 5th International Composers' Competition "Sinfonietta per Sinfonietta" under the honorary patronage of Professor Krzysztof Penderecki.

On the 4th of July, the American Independence Day, Sinfonietta Cracovia chamber musicians and friends will present works by George Gershwin, Steve Reich and Paweł Szymański. The annniversary edition of the Festival will end on 6 July with the final concert in the Cloth Hall featuring unique guests associated with Sinfonietta Cracovia for many years – world-renowned American conductor John Axelrod and legendary clarinettist Michel Lethiec.

Among the non-standard proposals there will be barbecue clubbing and open-air jam sessions.