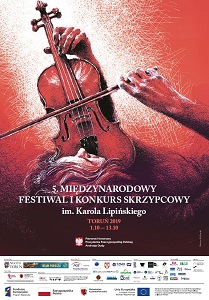 Young violin virtuosos from 13 countries will compete for the Grand Prix at the International Karol Lipiński Violin Competition, which will be held on 1-13 October 2019 in Toruń. The total prize pool is valued at 51,000 euros.

The Toruń Symphony Orchestra is organizing the International Karol Lipiński Violin Festival and Competition for the 5th time, bringing violin virtuosos from around the world to Toruń. This year, the event is held under the Honorary Patronage of the President of the Republic of Poland Andrzej Duda.

Over 80 young violinists from various parts of the world have signed up for the 5th International Violin Competition. 22 qualified participants from 13 countries will be evaluated by the international jury composed of outstanding violinists and educators, chaired by world-famous violin virtuoso Prof. Ilya Kalerem.

The festival consists of numerous events: concerts, recitals, lectures, film screenings, and luthier workshops. The main idea is to ​​honor Karol Lipiński and highlight his place in the history of Polish and world music. Equally important is the promotion of Polish music in the world, thus the the Competition and the Festival will feature many works written by Polish composers. Ilya Kaler will perform Maciej Bałenkowski's Hommage à Lipiński, Atom String Quartet will present their renditions of Krzysztof Penderecki's works, and Krzysztof and Jakub Jakowicz will perform Sonata for two violins by Aleksander Tansman. In addition, the Winners' Concert will premiere Essay for solo violin and string orchestra by Paweł Riess.