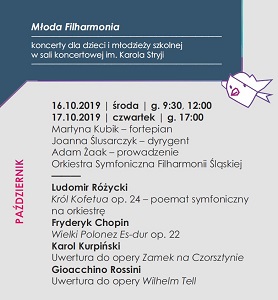 The upcoming concerts from the "Young Philharmonic" series will take place on 16 and 17 October 2019 at the Henryk Mikołaj Górecki Silesian Philharmonic The Philharmonic will welcome the youngest music lovers with a concert of works by Ludomir Różycki, Fryderyk Chopin and Karol Kurpiński.

The concert will open with a symphonic poem King Kofetua, Op. 24 by Ludomir Różycki, based on the poem by Czech symbolist Julius Zeyer. In 1912, the work was awarded a prestigious prize at the composer's competition organized on the occasion of the 10th anniversary of the Warsaw Philharmonic's foundation. The composition impresses with its melancholy to this day, being one of the composer's most interesting achievements in the field of symphonic music.

Together with the Silesian philharmonics, pianist Martyna Kubik will perform the expressive Grand Polonaise in E flat major, Op. 22 by Fryderyk Chopin. The work was written in 1836 in brilliant style and was dedicated to Baroness d’Este. The role of the orchestra is secondary to the vrtuoso figurations of the soloist, which abound in the composition.

The programme will also include two overtures: to the Polish opera The Castle of Czorsztyn by Karol Kurpiński, and to the opera Wilhelm Tell by Gioacchino Rossini. The concert will be supervised by Joanna Natalia Ślusarczyk, conductor in residence of the Silesian Philharmonic in the 2018/2019 season as part of the programme implemented by the Institute of Music and Dance.