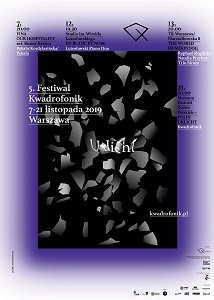 The fifth edition of the Kwadrofonik Festival will take place on 7-21 November 2019 in Warsaw.

Light and sound – these are two forces of nature affecting our senses. In a capacious and tolerant art universe, light and sound have the right to meet. Looking, seeing, perceiving, shading, interpreting the light, its meaning and colors – both by directors, composers and invited musicians – will be the theme of this year's edition of the Kwadrofonik Festival. Black and white Buster Keaton's silent film with unusual sounds of percussion instruments in the score performed by the Pękala / Kordylasińska / Pękala duo, two black pianos from which pianists of the Lutosławski Piano Duo will bring out all shades of French Impressionist masterpieces – from white to black, or the songs of the blind singer Moondog in the intimate interpretation by Natalia Przybysz, Raphael Roginski and Širom – these are the proposals of the upcoming edition of the Festival.

Th Warsaw premiere of Urlicht for keyboard instruments and percussion written by the Kwadrofonik members will take place on 21 November at the POLIN Museum of the History of Polish Jews. This new project is a musical interpretation of the phenomenon of light: not only as a physical force, but also as pure energy that has existed since the very beginning of the universe. In the Urlicht project Kwadrofonik creates a form of variations based on the chorale and its counterpoint, which resound separately or enter into dialogue with each other.