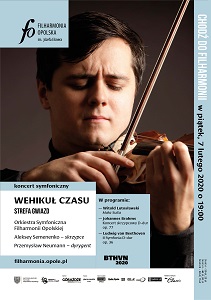 The next symphony concert in the "Zone of Stars" series will be held on 7 February 2020 at 7 p.m. at the Józef Elsner Opole Philharmonic. The concert entitled "A Time Machine" will feature violinist Aleksey Semenenko – scholarship holder of Deutsche Stiftung Musikleben.

The repertoire has been arranged in reverse chronological order: Lutosławski – Brahms – Beethoven. The evening will begin with Witold Lutosławski's Little Suite for chamber orchestra – a four-part piece based on folk rhythms and melodies of Podkarpacie region. Then we will listen to Johaness Brahms' Violin Concerto in D major, Op. 77 performed by the Ukrainian violin virtuoso Aleksey Semenenko – a member of the prestigious BBC New Generation Artists programme, who made his debut in New York in the Young Concert Artists series in 2012. The concert will be closed with Symphony No. 2 by Ludwig van Beethoven, whose 250th birth annivrsary falls this year. The Opole Philharmonic Symphony Orchestra will perform under the baton of Przemysław Neumann.

The concert is held as part of the "filharmonia / ostrożnie, wciąga!!!" programme co-organized by the Institute of Music and Dance.

Information on tickets at: https://filharmonia.opole.pl/wydarzenia/68-sezon-artystyczny-aleksey-semenenko/