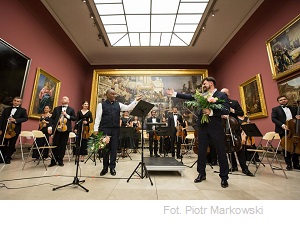 Sinfonietta Cracovia and the National Museum in Kraków invite you for the online premiere of the concert entitled "For our freedom and yours." The broadcast will take place on 22 May 2020 at 8.00 p.m. as part of the "Ty-Dzień Muzeum w NMK" project.

The concert "For our freedom and yours" took place in the Gallery of 19th Century Polish Art in the Cloth Hall of the National Museum in Kraków as part of the 5th Sinfonietta Festival. The Sinfonietta Cracovia Orchestra of the Capital City of Kraków under the baton of Jurek Dybał presented a programme in the spirit of American concept of freedom and friendship between the nations. The soloist of the concert was world-famous tenor Stanley Jackson, who performed spirituals, which are an important element of African American heritage, and popular songs from the West Side Story musical by Leonard Bernstein. That evening he sang for the first time in Polish! He presented his own interpretation of 6 Songs to words by Adam Mickiewicz, Op. 18 by Ignacy Jan Paderewski.

Link to the online broadcast: https://mnk.pl/aktualnosci/tydzienmuzeum