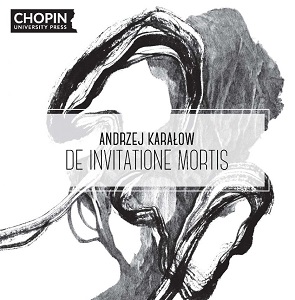 In De invitatione mortis we are dealing with a text that is related to the values and philosophy of the Christian religion. Death, around which the main theme revolves, is not presented as the evil awaiting the man at the end of his life. It is only a symbolic transition to another, new world. The metaopera De invitatione mortis aims to show a different approach to the genre of opera by combining different stylistic and technical influences. It is a kind of a “desktop” opera, devoid of stage action: It adopts the form of a mystery play, in many aspects of an ascetic music drama, in which the voice acts as the communicator of the libretto’s content and its message. The mystery play character of De invitatione mortis concerns primarily the creation of a sound environment whose centre is occupied by the word, leading the course of the entire metaopera, which can be perceived as a ritual. One can say that De invitatione mortis is a mystery play in which the sound and word, dominating the whole structure, create a new, alien world based on synesthetic and abstract references. De invitatione mortis is also an attempt to address the issue of merging various genres from the borderline of classical, improvised, and electronic music.