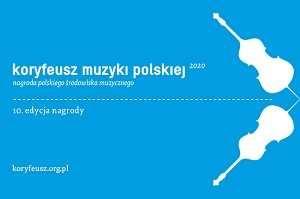 The 10th edition of the "Coryphaeus of Polish Music" award of the Polish music community has officially started. Nomination forms for candidates can be submitted until 21 September 2020 through the website www.koryfeusz.org.pl in the categories: "Personality of the Year", "Event of the Year" and "Honorary Award", as well as in the "Discovery of the Year" category for debuting artists.

Since 2011, the Polish music community has awarded the "Coryphaeus of Polish Music" award to its most prominent representatives. The event is organized by the Institute of Music and Dance. "Coryphaeus" is a distinction for people, groups of artists and institutions operating in the area of ​​Polish music. The award is granted for achievements in the last artistic season, with the exception of the "Honorary Award", which is awarded for overall activity. Applications can be submitted by members of the community.

The winners in the categories "Personality of the Year", "Event of the Year" and "Honorary Award" are selected in a secret ballot by the Electoral College. It consists of rectors of music academies and universities, directors of musicology and music institutes, music journalists, representatives of unions and organizations, as well as all winners who have been awarded in all categories. The award in the "Discovery of the Year" category is granted based on the results of open voting from the audience, which will take place between 1 and 6 October at www.koryfeusz.org.pl.

The winners will be announced on 7 November 2020. They will be presented with statuettes designed by Professor Adam Myjak.

The rules and regulations are available at: www.koryfeusz.org.pl