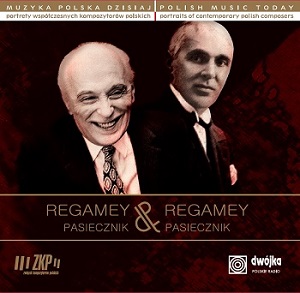 The last album released in 2020 by the Polish Composers' Union as part of the "Polish Music Today – Portraits of Contemporary Polish Composers" series is completely unique. Due to the special relationship and fate of both characters, the publisher made an exception and decided to devote the album to two composers instead of one. In addition to works by the "Polish-Swiss composer" Konstanty Regamey, the CD includes pieces by his father, Konstanty Kazimierz  – an almost completely unknown composer, who worked mainly in distant Ukraine, and in 1938 was sentenced to death by the Soviet regime.

The originator of the project and the author of the essay for the album is Jerzy Stankiewicz, who has devoted many years to researching the life and work of both Regamey (as well as popularizing the discovered works and contexts).

He invited two renowned artists to participate in the project – sisters Olga Pasiecznik (soprano) and Natalia Pasiecznik (piano). They performed a repertoire of songs and romances as well as piano pieces by the Regameys. The recording was made in the Witold Lutosławski Concert Studio of the Polish Radio in August 2020 by Ewa Guziołek.

Co-financed by the Minister of Culture and National Heritage from the Culture Promotion Fund as part of the "Musical Trace" programme operated by the Institute of Music and Dance. The album was released thanks to the support of the ZAiKS Authors' Association. The project partner was Repliq Media Sp. z o.o. Co-producer of the recording and CD edition is Programme 2 of the Polish Radio.

The Polish Composers' Union own releases are intended solely for promotional, educational and research purposes. They are not intended for sale. They are provided free of charge to interested institutions and individuals, but due to the very small circulation and large interest, priority is given to music libraries, where a broad audience can benefit from each set. If you are interested, please contact the Polish Music Information Centre POLMIC (contact: Izabela Zymer, This email address is being protected from spambots. You need JavaScript enabled to view it.).