"REnew" – concert on the occasion of Marian Hemar's 120th birthday 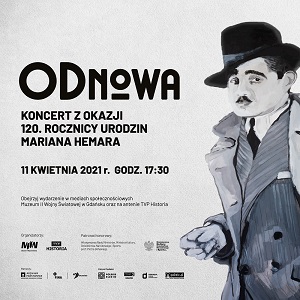 Marian Hemar was a lyrical poet, an unequaled satirist, author of plays, brilliant sketches and monologues, the greatest pre-war songwriter with over 3,000 songs to his credit written for the best interwar cabarets. He entertained and educated, he did not shy away from cultural jokes and wise, satirical commentaries, and at the same time he was an uncompromising patriot, devoted to his homeland until the end of his life. The popular music of the last century, which was Hemar's domain, is nowadays more and more often presented in new, modern arrangements. Songs to the words of Hemar, sung before the war and, unfortunately, forgotten today, has prompted the Museum to take up an educational challenge and recall this rich repertoire to the contemporary audience.

New song arrangements were prepared by recognized artists as well as students, graduates and lecturers of the Stanisław Moniuszko Academy of Music in Gdańśk under the supervision of Kamil Cieślik. In addition, the concert will premiere songs to several poems by Hemar written by Agnieszka Zimna, Dawid Ludkiewicz and Piotr Pudełko. The pieces will be presented by soloists (Maria Malinowska, Jakub Kornacki, Karol Drozd, Marta Burdynowicz), the Art'n'Voices vocal octet and the Discantus Chamber Orchestra conducted by Sabrina Stachel.

Thanks to the cooperation with the National Film Archive – Audiovisual Institute and the National Digital Archives, the concert will be accompanied by specially prepared visualisations.

In April 2021, the Museum of the Second World War in Gdańsk will release an album with songs by Marian Hemar.