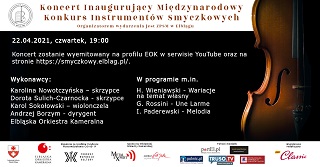 On 22 April 2021 at 7.00 p.m. the Elbląg Chamber Orchestra under the baton of Andrzej Borzym Jr will inaugurate the International String Instruments Competition in Elbląg. The concert repertoire includes works by Rossini, Wieniawski and Paderewski.

During the concert in Elbląg, we will hear Variations on an Original Theme by Henryk Wieniawski, who was called by Florizel von Reuter "the Chopin of the violin". The comparison between Wieniawski and Chopin was due to the poetic tone and the presence of national elements in the violinist's compositions. These characteristics also distinguish numerous compositions by Ignacy Jan Paderewski, who made a tremendous international career not only in the field of art. The concert will feature his Melody for violin and orchestra. We will also hear Gioacchino Rossini's variations Une Larme performed by the orchestra with cellist Karol Sokołowski.

The concert will be broadcast on the Elbląg Chamber Orchestra YouTube channel and on the website https://smyczkowy.elblag.pl/.