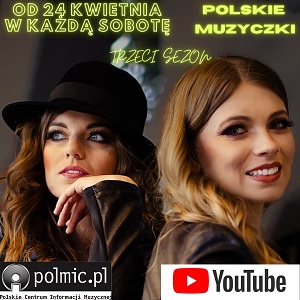 The Life and Art Foundation invites you to the third series of educational films about Polish composers, "Polskie Muzyczki" [Polish Women Musicians]. New episodes will be posted every Saturday from 24 April 2021 on the project's YouTube channel.

The project idea was born before the pandemic. Joint concerts of clarinet player Barbara Borowicz and pianist Anna Miernik were preceded by lectures aimed at introducing the performed music. Currently, instrumentalists have temporarily transferred some of their activities to the Internet. The idea of ​​their online project is to create a series of educational films dedicated to Polish composers, which are posted on YouTube and Facebook to watch for free. The artists want to pursue the idea of ​​"learning through play" –  their short film episodes contain high-quality content presented in a light and pleasant form of a dialogue between the pianist and clarinetist, who are also friends.

The third season of "Polskie Muzyczki" will start with an episode devoted to Krzysztof Penderecki on the 1st anniversary of his death. The series will also include interviews with Agnieszka Zdrojek-Suchodolska and Łukasz Woś. The remaining videos will talk about Krystyna Moszumańska-Nazar, Karol Kurpiński and Ignacy Feliks Dobrzyński. Facts from the history of music will intertwine with funny anecdotes, thus making the materials more accessible to an average audience and helping to break the "artist-viewer" barrier. The aim of the project is to encourge listeners to participate in live concerts when it is fully possible.