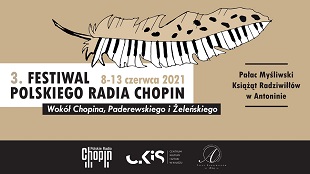 The 3rd Festival of Polish Radio Chopin will take place on 8-13 June 2021 in the Hunting Palace of the Radziwiłł Princes in Antonin, where Chopin stayed in 1829. The concerts of this year's edition entitled "Around Chopin, Paderewski and Żeleński" and the preceding lectures will be broadcast on Polish Radio Chopin.

This year's edition will consist of 3 vocal and instrumental concerts (performed by: soprano Bożena Bujnicka with pianist Marek Szlezer, bass-baritone Stanisław Kierner and pianist Michał Rot, and singing actor Jacek Kotlarski with the band of jazz pianist Kuba Stankiewicz), 2 piano recitals (of Karol Radziwonowicz, considered to be the most outstanding performer of Paderewski's works, and Mateusz Dubiel) as well as a chamber concert (with the participation of the famous Polish cellist Marcin Zdunek and Paweł Wakarecy, finalist of the 16th International Chopin Piano Competition in Warsaw).

The current edition will continue the tradition of world premieres of piano compositions written on a special commission from the Polish Radio Chopin. During the inaugural concert, Marek Szlezer will perform the monumental Fantasie by Krzysztof Meyer. We will also hear Władysław Żeleński's Roma – a piece written for the 100th anniversary of Chopin's birth in 1910, which has never been recorded so far.