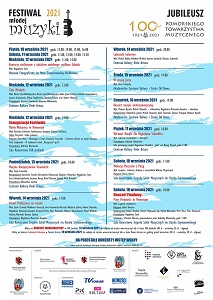 The Pomeranian Music Society in Toruń celebrates its 100th anniversary with a special edition of the Young Music Festival, which will run from 10 to 18 September 2021.

The festival is a continuation of social concerts that have been held regularly since 2012. This year's edition will celebrate the anniversary of one of the most important music associations operating in the region since 1921. One of the most important achievements of the Pomeranian Music Society is the establishment of the Music Conservatory, the present Music School Complex. From the very beginning, the society has been organizing concerts, promoting high culture, developing and disseminating music culture and artistic education.

The programme will include premieres and works by various generations of artists associated with Toruń, inclusive of young composers. We will hear classical, new, carillon, electroacoustic and jazz music, as well as literary songs. Two monographic concerts will be dedicated to the memory of Bogusław Schaeffer and Piotr Perkowski. In addition, the festival will feature events promoting young instrumentalists, concerts and meetings with outstanding artists from all over Poland, including Piotr Moss from Toruń, an exhibition, "Electro-Legends" workshop, and an anniversary publication.