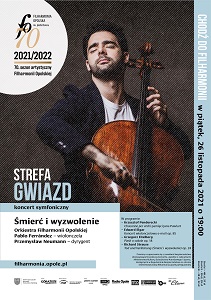 Spanish cello virtuoso Pablo Ferrández will perform as a soloist with the Opole Philharmonic Orchestra under the baton of Przemysław Neumann on 26 November 2021 at 7.00 p.m. The concert programme will be conducive to reflection.

First, we will hear Krzysztof Penderecki's Chaconne from Polish Requiem. The successive parts of the work commemorate important figures and events in Polish history. The last one, Chaconne, was written in 2005 and is dedicated to John Paul II.

Edward Elgar's moving Cello Concerto in E minor gained fame thanks to Jacqueline du Pré, one of the most expressive artists in the history of music. The British composer's nostalgic phrases will precede the performance of two symphonic poems. The first will be Grzegorz Fitelberg's The Song of the Falcon; an extremely successful composition, which provokes the question: what else would Fitelberg have created if he had not devoted himself to conducting? The last piece of the evening, Death and Transfiguration, was written by the 25-year-old Richard Strauss as the first of his symphonic poems not inspired by literature – Aleksander Ritter's poem included in the score was written after the completion of the piece. Strauss himself wrote about the programmatic assumption of this composition in one of his letters: "It was six years ago when the idea came to me to write a tone poem describing the last hours of a man who had striven for the highest ideals." The audience fell in love with the work, the critics remained unconvinced – it seems that the very attempt by Strauss to deal with the subject of the final issues aroused their concern. The theme of liberation with which the poem ends, full of strength and majesty, however, brings hope for a unique dimension of this unknown reality.