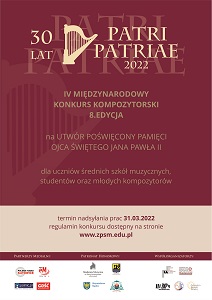 The Wojciech Kilar State Music School Complex in Katowice announces the 4th "Patri Patriae" Composers' Competition for a piece dedicated to the memory of the Holy Father John Paul II for high school and university students and young composers. The deadline for submitting applications is 31 March 2022.

The "Patri Patriae" Composers' Competition was first announced on 16 October 1991 by the then Karol Szymanowski State Secondary Music School in Katowice to commemorate the pontificate of Pope John Paul II – "Father of the Homeland". Its founder and main organiser for 30 years has been Felicja Bieganek, who with this initiative has launched the careers of many of today’s recognised composers. The co-organizer of the competition is the Art Education Centre in Warsaw, the Polish Composers' Union – Katowice Branch, the Association of Alumni and Supporters of the Music High School in Katowice and the New Music Orchestra. The honorary patrons of the competition are the Marshal of the Silesian Voivodship, the Mayor of Katowice, the Archbishop of Katowice and the Rector of the Academy of Music in Katowice.

Three financial awards as well as honourable mentions will be awarded in each age group. The winners of the competition will receive the "Lyre" statuettes. The awarded works will be performed at the Winners Concert on 15 October 2022.

The competition rules are available at: http://2st.zpsm.edu.pl/konkursy/patri-patriae