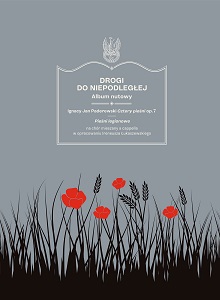 The programme of the 7th Music Festival ‘TRZY-CZTE-RY. Contexts. Contrasts. Confrontations’, which will take place in the Witold Lutosławski Concert Studio of the Polish Radio in Warsaw on November 17 - December 10, encompasses music from Poland and works of those foreign composers whose birth anniversary falls in 2022.

Premieres of Eufonium by Aleksander Lasoń and False Emotions by Ryszard Alzin among other Polish and international works of contemporary music will be presented at the Festival.

This year's festival will include 8 concerts with the participation of soloists, chamber musicians and AUKSO - Chamber Orchestra of the City of Tychy. The ‘Trampoline of the Young’ also returns to the program as an accompanying event, during which the most promising artists of the young generation will present themselves.

Co-financed by the Minister of Culture and National Heritage from the Culture Promotion Fund as part of the ‘Music’ programme implemented by the National Institute of Music and Dance.

The partner of the event is the Association of Authors ZAiKS.