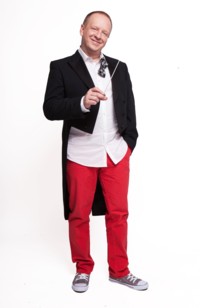 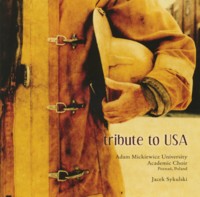 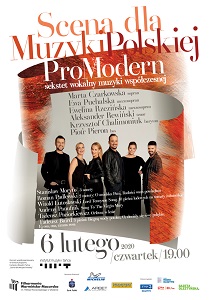 A concert of the proMODERN vocal sextet at the Warmian-Masurian Philharmonic on 6 February 2020 at 7:00 p.m. will be a unique opportunity to listen to rarely performed compositions by Polish artists. The next edition of the "Stage for Polish Music" project, implemented by the Institute of Music and Dance, will feature vocal works by 20th-century composers.

Three sonnets by Stanisław Moryto, dedicated to the composer's wife and created shortly before his death in 2018, were written especially for the proMODERN ensemble. Stanisław Moryto's teacher was Tadeusz Paciorkiewicz, whose cantata Orpheus in the woods, based on the poem by Krzysztof Kamil Baczyński, will be also performed by the sextet during the upcoming concert. Moreover, the programme will include two motets by Paciorkiewicz's contemporary, Roman Padlewski, Lord Tennyson Song  and 10 Polish Folk Songs on Soldier Themes by Witold Lutosławski, Song to the Virgin Mary by Andrzej Panufnik, and Three Songs by Tadeusz Baird. 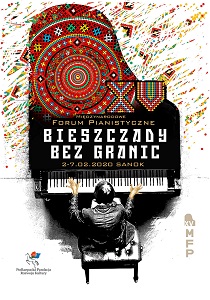 The 15th anniversary edition of the International Piano Forum "Bieszczady without Borders" will run from 2 to 8 February 2020. In the first week of February Sanok will become the winter capital of pianists, with over 500 participants from all corners of Europe and beyond.

The International Piano Forum "Bieszczady without Borders" is one of the largest community-driven academic projects of the Carpathian Region. The Forum is an educational opportunity worthy of the attention of young pianists, for it is a place of the exchange of ideas and experiences between students. Here, common interests and passions lead the way for cooperation amongst unfamiliar faces. You will find that the whole spectrum of knowledge, both theoretical and practical, is addressed. From methods of practicing, courses on self-care and rehabilitation, to training in the business side of culture and self-promotion, this Forum leaves few, if any, questions of young pianists unaddressed. Ultimately, it is here that prestigious Masters and Pedagogues of the Art of Piano meet with talented and promising young pianists. Qualified active participants will take part in individual and open lessons with the Masters; thematic courses; concert practices – a series of recital and symphonic evenings; lectures and seminars; competition for prestigious awards and distinctions of the 15th edition.

The organizers have also prepared a musical feast for the audience – 6 unique concerts at the Sanok Community Center, presenting masterpieces of Polish and world piano literature. This year's soloists will be: Pavel Dombrovsky – winner of the 1st prize at the Stanisław Moniuszko International Polish Music Competition in Rzeszów, and professors Lidia Grychtołówna, Mihaił Woskriesienski and Igor Olovnikov. In addition, the concerts will feature Adam Bałdych Quartet, "Śląsk" Song and Dance Ensemble and the "Academy" Lviv Chamber Orchestra conducted by Igor Pylatyuk, who, together with outstanding soloists, will present piano concerts by Wolfgang Amadeus Mozart and Fryderyk Chopin during the Final Gala.

Warsaw | Inauguration of a new concert series in the Royal Castle 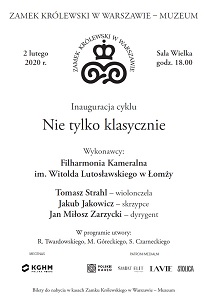 The new concert series "Not only classically" will be inaugurated with a concert of Polish music on 2 February 2020 in the Grand Hall of the Royal Castle in Warsaw.

Lituania (2011) by Romuald Twardowski was written on the 100th anniversary of the birth of Czesław Miłosz. The composer, an expert in Lithuanian music, refers to the traditional form of "sutkine" (with fast melodic motifs) and phrases of "rauda" (of an elegiac character). In the Kurpie Melodies (2016), the composer refers to Kurpie folk music, emphasizing its original beauty and charm; the work was commissioned by the performers of the concert – the Łomża Philharmonic.

Mikołaj Górecki's Elegy (2014) for cello and string orchestra was dedicated to Tomasz Strahl, as well as Sławomir Czarnecki's Concerto Lendinum (2005) for violin, cello and orchestra. The works are the result of searching for one's own style, one's understanding of sound beauty and harmonic order by combining traditional elements (baroque concerto form, folk melodies of the Lublin region) with modern techniques (structuralism, spectralism, repetitiveness, elements of sonorism and minimalism). We will also listen to the Narew Concerto (2019) by Sławomir Czarnecki, which was dedicated to maestro Jan Miłosz Zarzycki and was commissioned by the Łomża Philharmonic.

The NFM World Music Orchestra, whose artistic director is the composer, guitarist and teacher Jerzy Adam Nowak, will perform on 2 February 2020 at 5:00 p.m. at the National Forum of Music.

Jerzy Adam Nowak graduated in composition at the Academy of Music in Wroclaw in the class of prof. Grażyna Pstrokońska-Nawratil. He was a scholarship holder of the Indian Government twice – he studied classical Indian music at Shriram Bharatiya Kala Kendra in New Delhi. As a guitarist, soloist of the classical Indian music group "Shanti Path", he performed in Poland, the Czech Republic, Germany and Italy. He is the author of music for over thirty theater performances presented in Poland and abroad, as well as for several documentary films. In his theoretical work, he explores the relationship between mind and sound, and looks for sources of music in both historical and psychological sense.

The programme of the upcoming concert will feature music by Jerzy Adam Nowak as improvised by the NFM World Music Orchestra artists: I. Mutiverse of Entangled Worlds, II. Multiverse of Imagined States, III. Multiverse of Singular States. As the author of the project points out: "There is a cosmological concept that our universe is not the only universe, that there are many universes known as the multiverse. Regardless of how true or false this concept is, we undoubtedly live in the psychological Multiverse of our own lives. Every existence is an incomprehensible and dynamic universe. Every existence collides with other lives, creating the reality of entities and phenomena. World music is a clash of many worlds: imaginary, tangled and singular".

Information on tickets at: https://www.nfm.wroclaw.pl/ 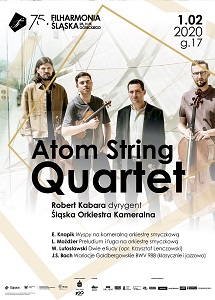 Atom String Quartet will perform at the Silesian Philharmonic on 1 February 2020 at 5 p.m. together with the Silesian Chamber Orchestra under the baton of Robert Kabara.

Atom String Quartet is one of the most intriguing string quartets in the world, and also one of the best Polish jazz bands. The ensemble won the "Fryderyk" award in the "Album of the Year - Contemporary Music" category for the album SUPERNOVA recorded together with the NFM Leopoldinum Orchestra.

The programme of the concert will include unusual compositions: Eugeniusz Knapik's Islands, the work awarded many times and constantly appreciated for extraordinary, poetic content, Leszek Możdżer's Prelude and Fugue for string orchestra, Witold Lutosławski's Two Etudes (arr. by Krzysztof Lenczowski), and Johann Sebastian Bach's The Goldberg Variations, BWV 988 in a completely new arrangament.

During the concert on 31 January 2020 at 7:00 p.m. at the Witold Lutosławski Concert Studio of Polish Radio in Warsaw, 25-year-old Tymoteusz Bies along with Sinfornia Iuventus will demonstrate his artistry, which is inspiring increasing delight among listeners and critics who see him as one of the most promising talents of the young generation. The programme will include Sergei Rachmaninoff's Rhapsody on a Theme of Paganini, Op. 43 and Symphony No. 2 in E minor, Op. 27.

Symphony No. 2 (1908) was to some extent a development of Pyotr Tchaikovsky’s symphonic ideas – neo-romantic, expressive, full of pathos and drama, with rich chromatic harmonics and colourful instrumentation; it is also very ‘Russian’ in spirit, although it does not contain many obvious excerpts of national music. Alongside Rachmaninoff's monumental piano concertos, it has become one of the artist’s most popular works, admired on concert stages around the globe for over a century.

Almost two decades later (1934), one of the composer’s last works and the last one for piano and orchestra was written: the daring Rhapsody on a Theme of Paganini. The fascinating piece is a set of variations on the 24th Caprice written by the legendary Italian violinist – captivating for listeners of this hypnotic work, as well as for many composers. Rachmaninoff work represents one of the most monumental and difficult pieces for piano, a true test for only the most skilled virtuosos.

The concert will be led by outstanding conductor Paweł Przytocki, artistic director of the Arthur Rubenstein Łódź Philharmonic since the 2017/2018 season. Russian music is particularly close to his heart – his recording of Rachmaninoff’s Symphony No. 1 was honoured by American music magazine La Folia.

Jelenia Góra | The Carnival of Wishes

The Lower Silesian Philharmonic in Jelenia Góra invites you to a carnival concert on 31 January 2020 at 7:00 p.m.. The evening will feature the world premiere of the latest piece by Artur Zagajewski.

Leonard Bernstein's music from the musical West Side Story was chosen by the participants of the programme "filharmonia / ostrożnie wciąga!" as one of the three works which will be included in the current season repertoire. The concert will start with Maurice Ravel's choreographic poem La Valse and end with his moving Bolero. We will also witness the premiere of the Concerto for two flutes wrote by Artur Zagajewski for the Lower Silesian Philharmonic as part of the "Collections – Composing Commissions" programme implemented by the Institute of Music and Dance.

The works will be presented by the Lower Silesian Philharmonic Symphony Orchestra and the renowned flute virtuosos – Agata Kielar-Długosz and Łukasz Długosz – under the baton of Szymon Makowski.

Information on tickets at: http://filharmonia.jgora.pl/repertuar,6/karnawal-zyczen,2880?did=4641

Rzeszów | The Carnival Concert at the Subcarpathian Philharmonic 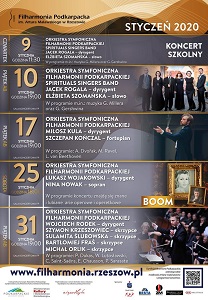 The programme of the concert on 31 January 2020 at 7.00 at the Artur Malawski Subcarpathian Philharmonic will include the most popular concert pieces.

The well-instrumented symphonic scherzo by Paul Abraham Dukas, The Sorcerer's Apprentice (1897), is a musical representation of Goethe's witty ballad, and Danse macabre (1874) by Camille Saint-Saëns presents a fantastic story about the crazy dance of death. The second of Saint-Saëns' works – Rondo capriccioso (1863) – from the very beginning charms with romantic emotionality and spectacular virtuosity of the violin. Gypsy melodies (1878) by Pablo Sarasate, a combination of the Gypsy-Hungarian motifs with czardas, expose the virtuosity of the soloist, similarly to the Poem (1896) by Ernest Chausson.

Partita (version for violin and orchestra of 1988) by Witold Lutosławski will present a different musical language. The composer wrote: "The three main movements refer, at least in terms of rhythm, to the pre-classical 18th-century tradition of instrumental music. However, this is only a kind of allusion. In terms of harmony and melody, Partita belongs to the same group of my last compositions as Symphony No. 3 and Chain I.

The works will be performed by the Subcarpathian Philharmonic Symphony Orchestra under the baton of Wojciech Rodek. The soloists will be Szymon Krzeszowiec, Bartłomiej Fraś, Sulamita Ślubowska and Michał Orlik.

On 21 January 2020 the first stage of the Tadeusz Baird Young Composers Competition has been settled.

Me and another one, emblem aditolek

Final concert – public performance of the works qualified for the second stage, followed by the results announcement and awarding ceremony – will take place in June in the Melcer Chamber Music Hall of the The Fryderyk Chopin University of Music.